How Do Bees Make Honey?

It Starts at the Flower

Bees don’t visit flowers just because they enjoy knowing they’re helping with pollination. Of course, we can appreciate the important role it plays in our own food production. However, bees wouldn’t do it unless they got another bonus from doing it. What is that bonus? Nectar and pollen. Both of these are crucial to producing honey and brood food the bees need to survive. 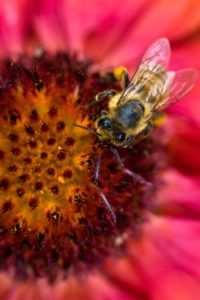 Worker bees go from flower to flower to gather these essential resources. They might get lucky enough to find a nearby nectar source, but if they don’t, they’ll go the distance to get it. Some bees can travel up to five miles to find a good nectar source.

Bees have a proboscis, a long tongue that resembles a straw. Once they find a good flower to get nectar from, they use this proboscis to suck up as much nectar as they can. On average, most honey bees have a proboscis that measures about ¼”. This doesn’t seem very long to us, but for forager bees, it’s the only way they can reach the nectar in most flowers.

They don’t just eat the nectar, but they do take in through their mouths and store it in their honey stomachs. Of course, one flower isn’t enough to create all the honey they need. In fact, forager bees typically don’t return to the hive until their honey stomach is quite full. That means they might need to visit up to a hundred or more flowers before the return to the hive.

Bee fact: One pound of honey can require up to 55,000 miles of flight and foraging to make.

Foragers Hand Over the Nectar

When the forager bee’s honey stomach is sufficiently stuffed with nectar, she’ll return to the hive. Once at the hive, there’s still plenty of work that needs to be done. House bees do most of the production work as the forager bees chew up the nectar and pass it along. The nectar mixture goes from bee to bee as they continue chewing it and passing it on. As you might assume, the bees also inevitably end up adding their saliva to the nectar throughout the process.

As it turns out, this is a crucial part of the honey making process. The enzymes within bee saliva alter the mixture, and ultimately prepare it for turning into honey. These enzymes are called invertase.

The processor house bees keep passing the nectar along to one another, adding more of the enzyme invertase each time they pass it along. Eventually, this nectar and saliva mix needs to go into the honeycomb. Bees are tiny creatures, and despite their honey stomachs, they need to repeat this process many, many times to fill even one cell within the honeycomb.

As they continue adding nectar to the cells, the enzymes in bee saliva change the type of sugar in the nectar. While nectar starts as primarily watered down sucrose, the enzymes transform it into glucose and fructose.

Bee fact: Nectar is typically around 70% water, but once bees transform it into honey, it contains around 18.6% or less of water.

Once the nectar (with bee saliva) goes into the cells, it isn’t ready yet. The mixture is still too watered down, and the worker bees in charge of processing honey have to fix that. To complete the process, they have to dehydrate the nectar until it’s sufficiently thick to be used as honey. Over time, some water within the nectar would inevitably evaporate. However, that would take far too long.

The bees have a clever solution for this problem. They rapidly beat their wings over the honey, which speeds up the evaporation process. They also spread the honey out, which allows more of the water to evaporate, because more of it is exposed to the airflow they’re creating.

Sealing the Honey for Later

Once the bees dehydrate the honey, and it’s thick enough for storage, it’s time to seal it up so they can use it later. The worker bees fill cells in the honeycomb with their finished product. Then, to keep it in perfect condition, they cap the filled cells with beeswax. These caps are one of the most important parts of storing honey. Each cell needs a perfectly airtight cap to keep the honey from getting microbes and moisture in it. Then, when they need to use the honey store later, it’s in the same pristine condition they left it in.