Roles of Bees in the Hive

The roles of bees in  the hive aren’t as simple as you might think. Most people know a hive consists of worker bees, some drones, and a queen. However, there’s a lot more to it than that. A beehive is an extremely structured and intricate system where every bee knows their job, and does it alongside the other bees. When it comes down to it, every bee needs the hive in perfect order to survive. 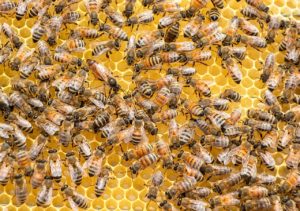 Looking at a bee colony, there are three main categories: the queen, drones, and workers. Each role in this caste system has a specific purpose, and hierarchy. When you get to the worker bees, there are even more segmented roles. Let’s start with an overview of bees’ main roles:

The queen bee is really the heart of the hive. She’s the mother of the colony, quite literally. In fact, the queen is the only fertile female in the entire hive. She manages this by way of the pheromones she releases throughout the hive. These not only keep the other female bees infertile, but it also calms the other bees and signals to them that she’s healthy and alive. Queen bees can live as long as five years, although they don’t spend the entire time laying eggs. For the most part, she does the majority of her mating and egg laying in earlier years. She’ll store sperm and simply use it later to lay fertilized eggs, which later grow into worker bees. She creates drones by laying unfertilized eggs.

Drones are the only male bees within the beehive, and as such, their only job is to mate with the queen. Drones are created when the queen lays unfertilized eggs. A more surprising fact about drones is that unlike the queen and workers, they don’t have a stinger. They also have larger eyes than worker bees, at about double the size. The reason for this is to better their vision in flight. They aren’t worker bees, but they do need the upgraded vision to mate. Bee mating is always done in flight, and they need to be able to see the queen bee. Drones are only hatched in spring, and usually kicked out of the hive by winter, so they don’t use up the hive’s critical resources.

Worker bees make up the majority of the hive by far. While there’s only one queen, and perhaps a couple hundred drones, there can be 20,000 worker bees in nature. Tended beehives can have much more, and can reach around 80,000 in number. As you might assume, worker bees do pretty much all of the work and maintenance that goes into a successful beehive. All worker bees are female, and like the queen, they have stingers. However, unlike the queen, all worker bees are infertile. Worker bees don’t do one job for their entire life. There are many jobs to do in the hive, and they all do each job throughout their lifespan. As they hatch and begin to mature, they instinctively move from one duty to the next.

After hatching, bees move from role to role, in this order:

The oldest bees are the foragers and scouts, which also means they typically reach the end of their lives while scouting for food. This makes less work for bees in other roles, such as undertakers, and keeps any illness away from the hive.

How long do bees live?

The queen bee can live for several years, but she’s the real exception. Bees do a lot in their lifetimes, even though it’s a fairly short amount of time. Worker bees live only about 6 to 8 weeks, usually around 60 days at the most.

When do worker bees start working?

Do bees die in the winter?

You won’t see bees flying around in winter when it’s cold, but that doesn’t mean they’re all dead. Yes, some bees die during winter, especially if resources become scarce in the hive. However, bees have an efficient survival method, and rely on temperature controllers and stores of honey to make it through the winter. The main exception to this is the drone bees, which are typically forced out of the hive to avoid using precious resources.