Species of Bees for Beekeeping

There are some favorite species of bees for beekeeping, but they all come with some advantages and disadvantages. What will really make the difference, is the reason why you’re keeping bees. For instance, if you’re interested in honey production, you might pick a different species than if you’re simply looking for pollinators. If you’re worried about swarming, you’ll pick different types of bees than if you’re looking for bees that are resistant to pests like mites.

Beekeepers in America and Europe almost always keep some subspecies or hybrid of the Western honeybee, Apis mellifera. In other regions, with other plants, beekeepers have other, more suitable species, such as the Asiatic honeybee, Apis cerana. For now, we’ll focus on the Western honeybee, and all its various subspecies. However, Apis mellifera is found worldwide, with the exception of Antarctica.

The most important thing to know about this species is that while it may be divided into hybrids and various subspecies, it’s incredibly rare to find purebred bees of any species. When we refer to different subspecies, we’re really talking about bees that are more dominant in those genes, and the traits those bees are bred for.

The Western honeybee is popular for not only only its honey production, but also its tendency towards a calm demeanor and how much easier to control it is.

Some of the main reasons Apis mellifera is ideal for beekeepers include: 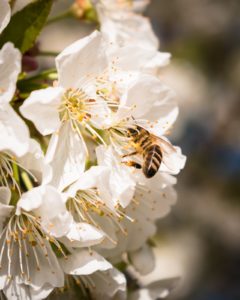 Beyond Apis mellifera, there are some favorite races that beekeepers domesticate for their own reasons:

While not considered a subspecies, the Buckfast bee is actually a hybrid of some of the most popular domesticated bees. The Buckfast bee is a hybrid of the Apis mellifera, the Western honeybee, and the Italian honey bee, Apis mellifera ligustica. One of the main draws to this bee is its resistance to disease and mites, which have wiped out vast bee populations in the past. The Buckfast bee is known to be a high producer of honey, and incredibly easy to work with. Even in hard conditions, it typically remains calm and docile, although some purebreds may swarm more than some Buckfast hybrids.

Carniolan honey bees are a true subspecies of the Western honey bee. While they’re very popular in certain areas of Europe, more and more beekeepers are choosing this race as their favorite. One of the most popular reasons it’s coming into more use is how gentle and easy to work with it is. Young Carniolan bees are also more resistant to diseases and parasites that can plague bees. Another noteworthy reason beekeepers might choose Carniolan bees is due to their anatomy. They have some of the longest tongues of any bee (excepting Caucasian bees), which means they can reach nectar and pollinate plants that other bees may not be able to.

However, it’s worth mentioning that there is one main drawback for some beekeepers. At the same time, it can also be an advantage. Carniolan queens are adept at adjusting the hive’s population as resources become more scarce or more plentiful. In the winter, or in times of dearth, when the hive lives off stores of honey, the queen lays less eggs. This can mean a smaller brood when less nectar is available. At the same time, hives can experience an explosive growth when nectar is plentiful.

The Caucasian honey bee is another popular subspecies of Apis mellifera, and for good reason. While it might not be the ideal choice in every region, it certainly thrives in others. Caucasian honey bees ramp up honey production in the middle of summer, and start slower in the spring. If you live in an area where nectar production peaks in the summer, these are the ideal species. They do well in mountainous regions, as they originate from the higher altitudes in Georgia and the Central Caucasus region.

Causcasian honey bees have some of the highest honey production once they get started, and have the longest tongues of any bee. Much like Carniolan bees, the queen can quickly change the hive’s population size when the availability of resources change. They typically have an easy going, docile temperament, making them easy to work with.

Italian honey bees are by far one of the most popular among beekeepers worldwide, and especially within the United States. One of the biggest reasons they’re so popular is that their calm, easy temperament makes them very easy to work with. Italian bees swarm less than other bees, and aren’t likely to protest much when you work with the frames.They tend to keep a more heavily populated hive, and Italian queens regularly produce highly prolific broods. In addition, queens may be easier to find than with other subspecies, because they have a bronze-gold colored abdomen.

However, Italian honey bees do come with some drawbacks, although a wise beekeeper can better manage these with the right strategy. One drawback is that while they are a prolific species, they also don’t adjust population size when honey stores get low. That can mean that you have less honey to gather after a hard season. Italian bees are also known to have a weaker sense of orientation than other subspecies, and may drift and rob other hives.

While there are some purebred Russian honey bee queens, the majority are hybrids. The truth is, these bees have a reputation for being harder to work with. This comes down to their more defensive behavior, and their tendency to swarm more than other honey bees. For an experienced beekeeper with the proper knowledge, they can be easier to manage. However, they do require a different set up and different management techniques for success. If they’re more difficult, why do beekeepers choose them?

Russian bees are known to be extremely tough and hardy. They can survive harsh, cold weather, and longer winters better than most other bee species. That’s not the only advantage of Russian honey bees, however. They’re also excellent honey producers, and can make around 10% more honey than Italian honey bees. Production aside, they’re all around tough, and that’s not all about climate. They also have stronger resistance to small hive beetles, American foulbrood, tracheal mites, and are about twice as resistant to Varroa (destructor mites) as any other honey bee. Another benefit is that they aren’t likely to wander and rob other hives.

There are some other bee species that you don’t see as often as the main types we’ve talked about. Sometimes that’s due to climate, temperament, honey production, disease resistance, or even typical broods. However, these species are still worth mentioning, because they just might come up in your search for bees.

German bees are now used primarily in certain areas of Europe, where winters can be very long, and very harsh. Some beekeepers still do keep German bees, although it’s not a more common species in the beekeeping world. A century or two ago, these were much more popular in beekeeping. However, they’ve declined in popularity because they’re more susceptible to many brood diseases, and have a more defensive demeanor. Both of which make German bees harder to manage, although they are very cold hardy, and therefore still an option for beekeepers in regions with harsh winters.

This is a specific line of bees developed by Dr. Marla Spivak from the University of Minnesota. The Minnesota hygienic breed was developed to resist disease, and they do a very good job at reducing brood disease. They’re actually a very specific strain of Italian bees bred for their good housekeeping, which ultimately prevents pest infestation and disease. The bees remove infected broods from the nest as soon as they’re detected, which prevents spread of disease to other, healthy broods. They have most of the benefits of other Italian honey bees, with the addition of a more hardy, resistant nature.

Cordovan bees are actually a special type of Italian bees (Apis mellifera ligustica). The first notable distinction between Cordovans and other Italian bees is their color. These bees are typically a light yellow, and don’t have stripes like many honey bees do. This color comes from a recessive gene, so Cordovans are specially bred to enhance this trait. While they are very similar to Italian bees in many aspects, they do differ on a few aspects. Queens tend to be easier to identify, and the bees are gentler and easier to work with than typical Italian bees. However, Cordovans are more likely to rob other hives. Cordovan bees are more popular in North America, although they’re still kept and bred elsewhere.

Of any species with a bad rap, Africanized bees just might take the cake. However, some beekeepers do still keep them, because they have some benefits. With that said, they certainly aren’t for new, or even intermediate level beekeepers. Their aggressive nature is intense, and they require a lot of experience, and an understanding of the species to properly manage. Their name is deceptive. Africanized bees (also unfortunately called ‘Killer Bees’), actually came to fruition in Brazil as an experimental hybrid. This species was created with the intent to improve parasite, pest, and disease resistance, while also increasing honey production.

Africanized bees are highly productive, and start foraging earlier than other bees. They do have smaller colonies that other species, but still manage a higher honey production on average. For most beekeepers, these bees’ hyper aggressive nature isn’t justified by their benefits, although some very experienced beekeepers do work with them successfully.

Africanized honey bees are hyper aggressive, but that’s because they’re trying to defend their hive. As opposed to other honey bees, they have a much larger alarm zone (area wherein they consider entering an offense), and will pursue any perceived attackers much farther. Unfortunately, they have a bad reputation due mostly to fear and hype. Yes, they are aggressive and swarm, but so do many other honey bee species when they feel the hive is in danger. However, per year, Africanized bee stings only result in one or two deaths on average. In comparison, deaths from other stings (from either bees, hornets, or wasps) add up to average 62. With that in mind, you can see how hype can determine the overall reputation of a species.