Worker bees all have their own roles within the hive, just as the drones and queen do. However, worker bees undoubtedly have some of the most complex, productive lives of any bee caste. A common misconception is that worker bees take on one job, and continue that job the remainder of their lives. The truth is actually much more interesting, and complicated than that. 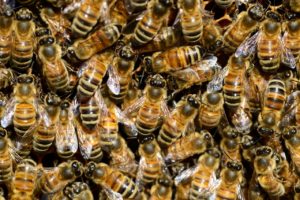 What do Worker Bees do?

The queen lays the eggs and the drones mate with the queen. The worker bees do just about everything else. Worker bees are in charge of everything from cleaning and expanding the hive, to rearing the brood, to gathering nectar and more. Throughout their lifetimes, worker bees take on every job within the hive. Some species work somewhat differently, but they all still follow the same general structure.

In short, what do worker bees do? Pretty much everything aside from reproducing.

What makes a worker bee?

How does a young bee get designated as a worker? There can only be one queen, and only male bees can be drones. When the queen lays unfertilized eggs, male bees (drones) hatch. However, when the queen lays a fertilized egg, it turns into a female bee. All female bees, aside from the queen, are workers. Occasionally, when the queen ages or becomes ill, the worker bees select some of the female brood as potential new queens. That’s really the only exception. The queen gives off pheromones, and one of the main functions of these is to keep the other female bees sterile.

Can any worker become a queen bee? Kind of, but it’s not that simple. If the queen ages naturally, worker bees start preparing special cells for the queen to lay eggs for potential new queens in. However, if the queen dies unexpectedly, the workers will select potential new queens from recently hatched larvae. They turn these workers into potential queens by feeding them royal jelly exclusively, and building a queen cell around them. Regular worker bee larvae get a little bit of royal jelly, but they mostly get bee bread, a mix of honey and protein rich pollen.

Worker bee larvae take longer to mature than the queen, despite the fact that they live for a matter of weeks, while queens can live for many years. After the queen lays a worker egg, the egg incubates for about three days before hatching. Then, nursery bees feed and care for the worker larvae for around five days. About half of the time (the first half, to be specific) the larvae get royal jelly, and the second half, they get bee bread (a mix of honey and pollen).

Then, the larvae have a little under two weeks to develop. They spin a little cocoon, and gradually begin the process of changing from larvae to pupae. After just under three weeks, all included, the young bees emerge, nearly ready to get to work.

Worker bees do almost everything in the colony, but we can segment these into categories. Each bee will eventually do each job, in their own time. It’s not a randomized process though. As bees age they move from one job to the next, according to their age.

Roles of worker bees include:

Without even one of these jobs, the entire hive would fail. That’s why bees are often referred to as a superorganism. Each individual bee relies on the hive as a whole for their own survival.

The Lifespan and Duties of Worker Bees

As we mentioned, worker bees ‘age’ into their next jobs. This practice is also known as temporal polyethism. Worker bees don’t live that long, so it has to be an extremely organized system. In the summer, worker bees typically live between six and eight weeks. ‘Fat bees’ or those lucky enough to live in the hive during winter can live several months. This is also called overwintering.

Once bees emerge from their brood cells, they start working nearly immediately. They only wait for their wings to dry, and that doesn’t take very long. Young worker bees can start their duties at only one day old. The ages at which bees move onto their next roles vary slightly, but we can group them into age ranges fairly easily.

It’s also worth mentioning that while most bees do continue moving on from one job to another, not all do. Some bees have DNA that essentially dictates a specialty role for them. For instance, a bee meant to be a specialist builder will still take on the jobs of cleaners, nurses, or even undertakers. Then, when they’re old enough to build, they stay at their station as builders rather than moving on to foraging or temperature control. 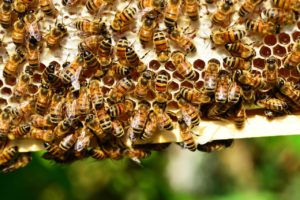 Let’s look at the duties workers take on at each stage of their lives:

Right away bees start keeping the hive clean. They visit empty cells, clean them, polish them, and then move onto the next cell. These cells are then used for food (honey) storage, or for new eggs from the queen. Typically, young bees start this job by cleaning their own cell, which they’ve recently vacated. Some cleaner bees might continue this job for the majority of their lives, although many move on after a few days of housekeeping duties.

Often, young bees move on from cleaning to nursing other developing bees. Younger bees feed older larvae a mixture of pollen and honey. Once bees get older, they can take over feeding the younger larvae. At about a week old, bees can produce royal jelly to feed younger larvae, the queen, and potential queen larvae. These nursery bees stay busy. In fact, a nursery bee might check on a single larvae up to 1,300 times a day.

Once specialized nursery bees are between a week and 12 days old, they might move on to caring for the queen. They may continue taking care of larvae, but will also feed, groom, and generally care for the queen.

Undertakers are also called mortuary bees. Their job is to help keep the hive clean and prevent disease by removing dead bees from the hive. They also take these dead bees far from the hive before ultimately disposing of them. Mortuary bees don’t just remove dead adult bees, either. They also spot any brood that has disease or has died. Ultimately, these bees play a huge role in preventing illness within the colony.

Around the time bees are old enough to produce royal jelly, they also begin producing wax flakes. These look like little white flakes of chips, but they’re actually what makes the wax cells that ultimately form the honeycomb and the hive. They also cap honey cells, and brood cells containing new larvae.

To form the neat, hexagonal cells that are so iconic of beehives, the bees actually deposit wax into a round shape. Then, they thin out the cell walls and form the circular cell into a hexagonal shape. Creating a hexagonal cell makes for a more stable construction, and it saves wax to use on other parts of the comb.

The inside temperature of a hive is crucial to not only the colony’s health, but also their ability to hatch broods and store honey. When the hive becomes too hot inside, temperature regulators may beat their wings to create drafts and wind currents throughout the hive. This helps cool the hive down.

However, when it’s not warm enough, specialized temperature regulators, heater bees, step in. Heater bees can significantly raise their own body temperature to help heat the hive. Heater bees can then enter empty cells, with their high body temperature, and heat the surrounding cells. Not only that, they can also heat individual brood cells. In fact, recent discoveries show that the heat of the brood cell can ultimately affect whether the larvae become specialized or more inclined to certain duties.

Some bees start foraging earlier than others depending on the hive’s needs. When bees first start foraging, they typically forage for pollen. As bees grow older, they go farther from the hive and focus their efforts on collecting nectar instead. When they go farther from the hive, and spend more of their time in the field, they’re called field bees. Bees often take on this role after approximately half of their lives, and often keep the task until their end. The majority of older foragers and field bees ultimately meet their end in the field. This might sound unfortunate, but for the hive, it actually helps maintain a cleaner, disease and pest free space.

The time frame for foraging bees can start as early as 12 days, and last all the way until they meet their end, around 42 to 60 days.

All bees take a turn defending the hive. In fact, in some species drones will actually help defend (or try to defend) the hive in times of crisis. Bees usually take on the task of guarding the hive once they’re also old enough to begin scouting and foraging for nectar. Guard bees take care of defending the hive from predators, pests, and even other bees defending the hive. These bees have a certain radius around the hive that they monitor, and will attack and try to drive off those that come within that area. It’s worth noting that some bee species are more defensive than others, and therefore have a greater alarm zone than more easygoing, passive bees.

How do bees decide who cares for the queen?

Like many of the specialist bee roles, there’s something in the nursery bees’ DNA that makes them more inclined to specialize in care. As a result, these bees are also more inclined to care for the queen’s every need. Specialized nursery bees may also take turns caring for the brood and feeding and grooming the queen.

Does the queen bee control the workers?

When we hear queen we usually think of a ruler making all the decisions for her colony (or kingdom). Queen bees don’t exactly work like human monarchs do. Yes, they’re a priority for the colony, but mostly because they produce the new generations that keep the hive thriving. Queen bees are also the only fertile female within a colony. The queen emits pheromones that keep the colony happy and reassured. Worker bees make choices in a more democratic form, with little input from the queen.

What if there aren’t enough worker bees doing certain jobs?

One of the reasons bees ‘age’ into different jobs at different times is because they also respond to the needs of the hive. While some things, like producing wax, can’t be rushed, bees can take over some jobs when there’s a shortage of workers on that task. If there’s a general shortage of worker bees, the queen simply lays more fertilized eggs. Some species of bees also adjust their populations depending on resources available.