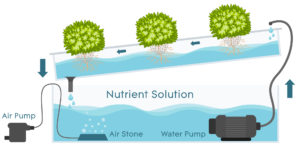 Benefits of Nutrient Film Technique systems include scalability, which makes it a favored system among commercial operations, and a fairly easy setup. NFT systems are suitable for a wide variety of plants, but are especially good for leafy greens and other plants that have smaller root systems.