How Does Pollination Work?

How does pollination work? There are two main types of pollination: Biotic and Abiotic. Biotic pollination happens with the assistance of animal pollinators such as bees, birds, or butterflies. Abiotic pollination doesn’t require an animal counterpart, and instead relies on other natural forces such as wind or rain. 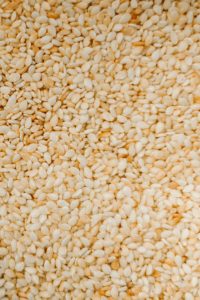 Why is Pollination Important?

Because pollination allows plants to produce seeds, it enables them to continue producing more of the same types of plants. This doesn’t end with plants like flowers. Fruiting plants, like tomatoes or pears, also produce flowers which need to be pollinated. If these plants flower and aren’t pollinated, they won’t produce the crops they’re grown for. Remember that while some plants do simply produce more seeds, many produce seeds in casing that we know as food.

For example, you can buy tomato seeds, but the seeds don’t simply come from the flower. The seeds are stored within the tomato fruit.

The majority of plants need some type of pollination to reproduce. While there are self pollinating plants, they still don’t usually produce the same yields that other varieties do. In fact self fertile, or self pollinating, plants still produce greater yields if they undergo outside pollination.

Both biotic and abiotic pollination are important. However, about 80% of crop plants need biotic pollination, meaning they need an animal pollinator. As you can see, if we didn’t have pollinators, our food supply would be drastically reduced.

As we mentioned, abiotic pollination relies on natural forces rather than animals. Essentially, either wind or water takes over the duties of pollination. While it’s far less common than biotic pollination, it still sustains some critical flora populations, like conifers. In fact, about 12% of flowering plants worldwide are pollinated by wind. Flowers pollinated by wind aren’t the typical, showy garden variety. In some cases, they might not even have petals or give off any scent.

The other method of abiotic pollination, by water, is even less common than wind pollination. Considering that wind pollination only works for about 12% of flowering plants, water pollination is quite rare. In fact, only about 2% of overall pollination occurs by water (also known as hydrophily). While pollen can travel by rain, or even underwater, the majority of hydrophily occurs when pollen travels along the surface of water. The pollen travels along the water’s surface until it reaches flowers to pollinate. That being said, a majority of water pollinated plants are now considered invasive, and may harm local ecosystems. 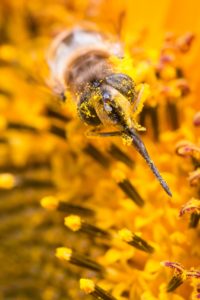 The nectar is sugary, and provides essential energy for pollinators. Pollen is actually a good source of protein for these animals, and it provides another essential part of many pollinators’ diets. In fact, bees mix pollen with honey to feed to young bees after they hatch.

Don’t be fooled into thinking all pollinators work the same way.

While biotic pollination is defined by one basic principle, that animals facilitate it, it actually occurs by very diverse means. Depending on the species of pollinator, they may pollinate only one species of plant, or they may pollinate several different species of plants. If you think that’s simple, don’t worry. It gets even more complicated for some of these special creatures. While some pollinators might only go to a specific species, it actually goes both ways.

One plant and one pollinator might seem hard enough. However, some plant species take it even further. Of course, it’s not all one sided. We’ll look at fig trees as an example. There are several different species of fig trees, but they’re not all pollinated by the same creatures. While all fig trees are pollinated by fig wasps (and no other creature), each individual species of fig wasp pollinates a specific species of fig tree. Fig wasps lay eggs in the tree’s flowers, but these flowers don’t open, making it nearly impossible for another pollinator to get inside. The wasps hatch, mature, and eventually burrow their way out of the fig, eventually going on to repeat the cycle all over again.

As you can see, pollination is not a one size fits all enterprise. 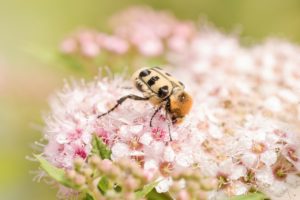 Some flowers can only be pollinated by special techniques on the part of the pollinators. Taking tomato flowers as an example, we can see that bees have to ‘buzz’ at a specific speed or frequency if they want to gather pollen from the flower. That’s because tomato plants (among some other species) have anthers with a very small hole. These are also called poricidal anthers. It might seem like a lot of work, but it does give the plants some big benefits. Not all visiting insects will actually transfer pollen in a way that allows tomato plants to fruit. So, rather than wasting precious pollen, the poricidal anthers guarantee that only effective pollinators can get to the pollen.

Living pollinators are far more common, although we see some much more often than others. For example, you might not see a yucca moth in your backyard or local park, but you’re pretty likely to see butterflies or bees.

Let’s look at some of the most common animal pollinators: 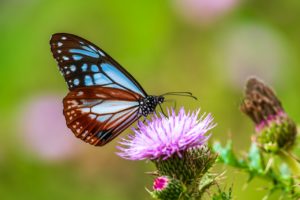 Self Pollinating (Self Fertile) Plants

Not all plants need an outside assistant to reproduce. While not as common, there are still self fertile, or self pollinating plants. So how do these independent species work? Let’s take a quick look:

In fact, some self fertile plants pollinate themselves before their flowers even open. The anthers (male parts) produce pollen which then transfers to the stigma (female part). Of course, this doesn’t always happen on its own. Typically the flowers still rely on some kind of movement to knock enough pollen onto the stigma for the plant to reproduce. You can see the benefit plants get when they self pollinate before their flower buds open. There’s much less risk of losing pollen to the wind, or having pollen drop too far away from the stigma.

Cross pollination (transfer of pollen from one plant to another) creates genetic diversity in further offspring. While self pollinating plants don’t get this advantage, they still have plenty of others. These plants can absolutely thrive and even take over certain areas since they don’t need to rely on pollinators. Not only that, because they don’t need animal pollinators, they also don’t need to use extra energy on producing large, attractive flowers. They can focus their energy on their own growth, and produce more seeds and fruits.

What Happens If No Pollinators Are Available?

Self fertile plants might not need a pollinator, whether living or not. However, most plants do need pollination from an outside source. When it comes down to it, most plants need a living (biotic) pollinator.

So, what would happen if we didn’t have them?

If we were only talking about a small area (say, an apple orchard), or even an individual plant, the answer is a lot simpler. The plant or plants in question simply wouldn’t be able to produce seeds, fruit, or reproduce.

However, when we look at the big picture, there are much more serious implications. While we know that about 80% of our food crops need biotic pollination, up to 95% of plants need animal assistance. Also consider that many of the animals raised for food depend on this vegetation for sustenance. If you look at it like that, it’s not just our crops and food supply that would be in major trouble, it’s also a wide range of ecosystems worldwide. Entire ecosystems can be wiped out when the plants that provide the nourishment and shelter they need vanishes. Now, think about the food chain at large.

Predators and carnivores might eat other animals, but their prey doesn’t grow itself. Any animal needs sustenance to grow, and as you go farther down the food chain, more and more prey animals rely on plants and vegetation as their primary food source.

So what happens without pollination? The bird’s eye view is that we most likely can’t survive. Entire ecosystems would be in jeopardy, and we could expect to see many of them disappear, along with the majority of our food sources, whether plant or animal based.

Hand pollinating plants is fairly impractical on a global scale, but in a greenhouse, garden, or even a farm, it’s a viable solution. Yes, humans can pollinate plants, but it takes work and diligence. There are several ways to manually pollinate plants, although we won’t got into detail yet, here are the main methods:

Why not use the power of wind if it already happens in nature? Not all plants are easy to pollinate this way, but it can still be done. It’s best to use oscillating (rotating) fans to ensure plants are swayed enough to release pollen, and so pollen goes to another plant. Even if they’re not the primary method of pollination, fans can help facilitate nearly any method whether directly or indirectly.

Small garden keepers rarely use shakers. These are pieces of equipment that actually shake crops. The vigorous motion helps shake pollen from the anthers of flowers. Some of the loose pollen then falls onto the stigmas of nearby flowers, thereby allowing pollination. While you won’t often see these in smaller greenhouses or home gardens, they’re used much more frequently in commercial applications.

This is the most work intensive, but also the most reliable and effective method for hand pollinating plants. Naturally, the larger the area you need to pollinate, the more work and time it takes. This method is also the most similar to natural pollination. Basically, you take a small, soft paint brush and sweep it across the anthers of a flower, gathering pollen as you go. Then, you take this pollen and transfer it to the stigma in the flower of another plant. In essence, you’re cross pollinating plants one by one. Like any other method of manual pollination, it needs to be repeated. It might sound like a lot of work, but it also offers the highest success rates if you can’t use natural pollinators.